5 Tooth Cleaning Habits That Can be Damaging

5 Tooth Cleaning Habits That Can be Damaging
Posted on: 16 November, 2021 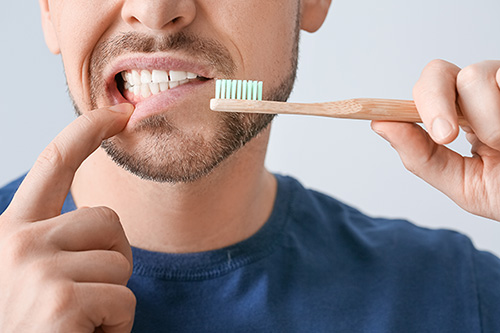 We do realise how important it is to take good care of your oral hygiene. However, even if you brush and floss daily, you could still unknowingly be doing things that can be causing damage. Here are five habits that can hurt your teeth or gums -

Brushing your teeth too aggressively

Tooth brushing aggressively can damage both your teeth and gums. The tooth structure can be damaged leading to sensitivity; and the gums could be traumatised causing recession. Both the force of brushing and direction is important.

Hard wooden toothpicks are not ideal for dislodging food between teeth. Chronic use can cause mechanical trauma to gums damaging them and causing the gums to recede. Rough use can also damage teeth and/or existing dental work like fillings or veneers. Toothpicks can also break, splinter, and get lodged in your gums causing irritation and abscess formation.

Aggressive use of interdental brushes

Interdental brushes when used in between teeth can put pressure on the tip of the gums, especially if you force it, or use a brush that is too big for the space. This can cause deformation and blunting of the triangular shaped gums over time creating dark spaces between the teeth.

Some whitening toothpastes can be highly abrasive. The abrasive particles may wear down tooth enamel, exposing the underlying dentin, which is yellow. Although the teeth may appear white initially, it may appear yellow over time. The toothpaste does not remove stains below the enamel. Also, the whitening toothpastes cannot change the natural colour of your teeth or lighten a stain that goes deeper than a tooth's surface. The loss of enamel could also cause sensitivity in areas of the teeth.

With diligent oral hygiene habits, you can avoid these damages. Considering that these habits are not that uncommon, during the dental exam at our practice, we will keep an eye out for any of these.

[an error occurred while processing this directive]